Giving to charity is hard when finances are tight. Many people may still be struggling as the economy inches its way out of recession.

So, financial advisors warn clients shouldn’t donate money unless they have enough to support themselves. 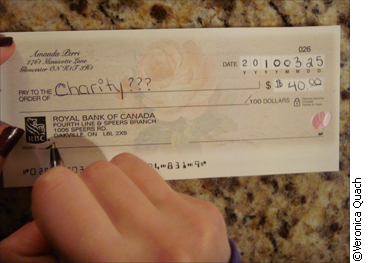 The size of cheques is smaller with the recession

But for those who want to make a difference, helping a charity doesn’t have to be a financial burden. Advisors point out options such as the tax credit that comes from giving and alternatives to giving cash, such as giving securities, volunteering time or handing over lightly used items.

People should always look out for themselves, warns Jo-Anne Ryan, vice president of philanthropic advisory services at TD Waterhouse.

“You need to make sure first, before you start giving to a charity that you can pay your rent, that you can take care of your basic living expenses. Hopefully, you’re saving some money also,” she says.

“If there’s any left over, then you can make a difference and you can donate to charity without donating a significant dollar,” Ryan says.

When giving money, financial advisors remind people to get a receipt. Both the federal and provincial government offer tax credits for donations.

Todd Morin, regional director of Investors Group Financial Services in Ottawa South, says people who donate less than $200 each year may want to wait several years before claiming it against their taxable income. The tax credit almost doubles if the total donate is more than $200.

“If you’re donating very little on an annual basis, which may be a lot for the individual, you want to accumulate those over the five years,” Morin says.

Ryan adds people can help causes and get tax breaks without donating cash.

Four years ago, the government started to allow donations of publicly-listed securities to charities to be exempt from capital gains taxation.

People can also volunteer for programs or events. Making things at home to sell for the charity, including food or art, is another option.

They offer tax receipts for items that are worth more than $1,000.

Morin says that it’s not all about the money.

“The tax benefit you’re going to receive is pretty limited actually,” he says. “It’s not a whole lot. So I think in many cases, it’s people who want to do good.”

Pierre Lagalisse, director of fund development at the Boys and Girls Club of Ottawa, echoes the sentiment.

“Very few people give because they are getting a tax receipt. I don’t know of any who do,” he says.

“It’s about our impact of what we do with youth in the community,” Lagalisse says.

In 2008, 24 per cent of Canadians who filed tax returns donated to charity, according to Statistics Canada. It was the same percentage as 2007.

However, the amount donated dropped in 2008 due to recession, reported Statistics Canada. Canadians gave $8.19 billion, a 5.3 per cent drop from the previous year.

“I think that if you financial situation isn’t such that financial donations something to consider at this point in time. Then, certainly, giving and volunteering you time is equally as important as giving money.”