Nothing says summer like kicking back on a patio, sipping a drink and enjoying the Sun.

In fact, marketing studies point to the link between nice, warm weather and the sale of alcoholic beverages: the hotter it is outside, the more alcohol is consumed. 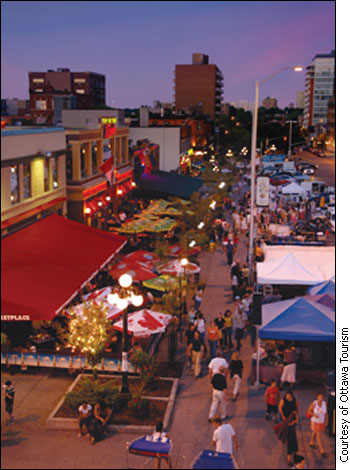 Ottawa’s historic Byward Market is home to more than 100 places to eat and drink.

That’s good news for bars and licensed restaurants that benefit from good weather in the summer months as well as peaks in tourism. The city of Ottawa hosts an average of 7.8 million person visits each year – generating more than $2.64 billion into the food and beverage sector of the nation’s capital in 2008.

But with more than 2, 000 places from which to purchase food – and more than 100 places to eat and drink in the downtown Byward Market alone – restaurants and bars must find ways to attract the business not just of tourists, but of locals too.

Jantine Von Kregten, director of communications at Ottawa Tourism, says that a great strategy is to let potential customers know up front what you offer.

“People like being able to gauge what they can expect from an establishment without having to commit,” she says.

And one of the best ways to do this in the summer is a patio.

Since the location opened in 2006, it has added a patio open between May and October. In a neighbourhood where space is at a premium, Lonestar’s patio acts as a second restaurant and double the space means double the number of customers that can be served.

“If the weather is nice, that can mean a lot more money for us,” says Lafreniere.

Gabi Chung, a server at Mexicali Rosa’s on suburban Hunt Club Road, adds that even restaurant patios in areas without a lot of pedestrian traffic can increase business.

“People like to people watch,” she says. “At any restaurant, booths by the window are the prime tables, so it’s no surprise more people want to sit outside if they can.”

But like any outdoor venue, there are risks in betting on patios for a restaurant’s success – the most obvious being weather.

“If no one can sit on the patio because it rains Friday, Saturday, Sunday,” says Lafreniere; “I just have to accept that that’s money lost.”

Lonestar rents its patio space on a monthly basis from the City and must pay for every square foot – regardless of how often that space is occupied by customers. The restaurant also pays a monthly fee for expanding its liquor license for five months of the year. 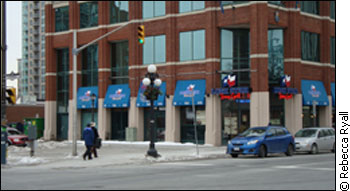 In the summer, the vacant space in front of Lonestar is taken up almost entirely by a patio.

If the weather is poor, then so are sales, leaving no income to offset these expenses.

According to the building permits branch of the City of Ottawa, the application process and construction costs of a patio are no small expense either – even if you do own the property. Businesses must apply 10-20 days before the patio opens and pay a fee of $12.00 for every $1,000 of construction. They must re-submit the application each year – and pay the again if the patio is disassembled at the end of each season – in case any zoning or building bylaws have changed.

But on those sunny afternoons or clear evenings, the profits really outweigh the time and cost.

“Restaurants without patios are noticeably slower,” says Lafreniere, “whereas we are always busy.”

In the 14 years Maclaren’s on Elgin Street has been serving, they have definitely experienced the disadvantage of not having a patio when summer rolls around.

“We’re a small piece of a big street and we’re one of the last places without one,” says the sports bar’s manager Barrett Karam.

In fact, Karam says it hasn’t even been worth the investment of doing any special summer marketing – beyond in-house promotions – because most of their competitors have patios.

Maclaren’s had been trying to get approval for its own since 2006 but, due to the bar’s proximity to residential areas, was not been successful.

“People like the feeling of being outside with a cold beer,” he says. “

And Maclaren’s couldn’t offer that. That is, until last November, when city council finally approved the application for a patio along the Maclaren Street-side of the bar that will seat 40.

“It takes a lot of investment – for building, fencing, furniture, food concepts, beer and wine selection, extra labour – but we really think it’s going to take off,” says Karam.