The king of sports in Canada will soon be promoting the king of beers but not for long.

But even before that move was officially announced, the NHL told Labatt that it was ending its contract this spring, replacing the brewer with a new North American-wide sponsor, Labatt’s competitor Molson-Coors. 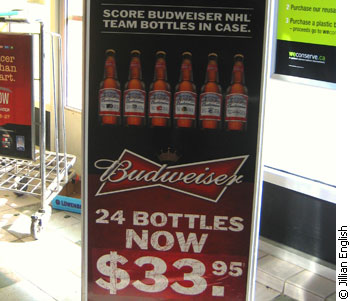 Labatt had hoped the sponsorship of hockey by Budweiser would be another stage in the transformation of the company from a large Canadian brewer to a much smaller subsidiary of the world’s largest brewing company Anheuser-Busch InBev.

That adjustment has already changed the jobs of the people who maintain and try to increase Labatt’s image and sales – its beer marketing representatives and managers.

“You can imagine how the sheer scope has changed in terms of a very small brewer maybe in the top 100 on the global scene, growing to the number one beer company in the world,” says Scollard, who has spent 20 years working in regional and national positions in sales and marketing at Labatt. “Virtually everything has changed.”

From regional to national

Former Labatt employee Dave Bryson started working for the brewer in 1983 when the company was traded on the Toronto Stock Excahnge.

During the next 15 years he worked in promotions, brand and sales management. Starting as a sales representative, Bryson said the company had a different focus then. 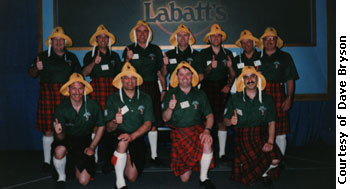 The things they’ll do in the name of beer.

That also meant Labatt made and sold different beers in different provinces, but Labatt began to move away from that strategy in the 90’s.

“The focus became more and more on national brands and the advertising and marketing money tended to leave the regions in favour of national driven programs,” he says.“That was one of the biggest changes during my tenure there.”

The new national focus altered the jobs of sales reps.

“There’s a lot less flexibility because we’re dealing with global brands and global properties,” says Scollard. “There are national directives on brands because you want that consistency of look and feel.”

“All resources are strictly monitored these days,” says Scollard. “The argument is that insights are left to bigger brains and the reps are more about execution.”

Another key change that came in the 90’s was a shift in focus from bar and restaurant accounts to sales in the retail side of the industry, which includes outlets like the LCBO. These new directives have affected the daily routine of sales reps. Less community-based partnerships means less social events for beer reps to plan and attend.

“In my day, very often two to three nights a week sales reps would have promotions, events or community activities that they were expected to attend on behalf of the company,” says Bryson. “The purpose would be to try to increase brand awareness and give people an opportunity to sample the brands.”

Because of these routine events, Bryson says sales reps often clocked-in 60 to 70 work hours a week.

But Scollard says with the change in job descriptions comes more defined expectations.

We’re still going through the challenges of finding the synergy after the buy . . . and that doesn’t happen in one day.

“Twenty years ago, sales calls were a lot more flexible but now the guys actually have to make a certain amount of calls per day and have a key objective or two before the call,” he says.

This has become most prevalent in the past couple years since Labatt’s owner InBev bought out Anheuser-Busch and became Anheuser-Busch InBev. Scollard says the monitoring necessary for a big company to operate successfully has been the most apparent change since the takeover.

“There is much more structure, much more process, much more auditing of those things to make sure the big machine is pointing in the right direction,” he says.

This new routine includes daily morning meetings across the country to review the previous day’s activity and set targets for the coming day.

Scollard says the company is still adjusting to the consolidation but is growing in the right direction.

“We’re still going through the challenges of finding the synergy after the buy . . . and that doesn’t happen in one day,” he says. “The processes in the business continue to grow and tighten.”

Scollard says the company’s increased size, when leveraged correctly, has benefits for the marketing team.

“Big’s only good if you’re good at being big,” he says.“If you’ve got 35,000 sales people all doing the same thing on the same day, you actually get some incredible traction.” 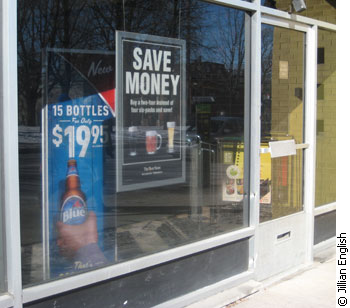 A last chance to influence Ontario customers as they enter the Beer Store.

Increased resources have allowed for larger sponsorships and marketing ventures all designed to sell more beer. For Labatt this includes the NHL property as well as Bud planes, “Bud Camp” and “The Bud Light Cruise” which takes 4,500 winners on a four-day cruise with concerts and freebies.

“We probably couldn’t do that in years gone by because we didn’t have the North American synergies we’ve got now,” says Scollard.

Although much smaller, Bryson says they had great sponsorship relationships during his years at Labatt, including the Calgary Olympics and the Toronto Blue Jays which Bryson says made the job a lot of fun.

Scollard says this is one thing that hasn’t changed with the sophistication of the company.

“Old-school guys might say, ‘we used to have a lot more fun.’,” he says. “I’ll tell you something, we still have a lot of fun. We work hard and there’s a lot more structure to what we do, but when it’s October 5 and it’s Keith’s birthday time again, the kilts are going on and we’re heading downtown.”