Those who heeded the advice of the wealthy barber can look forward to his return.

The 1989 best seller The Wealthy Barber was written by then 27-year-old Dave Chilton. Now in his late forties, he is busy finishing its sequel, The Wealthy Barber Returns: Slightly Older and Marginally Wiser, set for self-publication this summer. 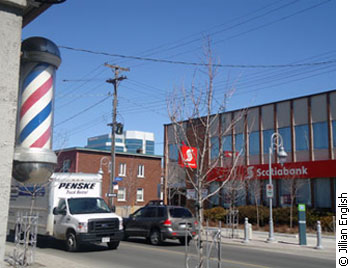 A short walk to deposit your cash

But new advice won’t lessen the impact the original book has on its still-growing readership. The book was written as a novel where the main character Dave gets long-term advice from his barber about how to handle his finances. Its most famous chapter is on consistently investing 10 per cent of your income.

Robbie Walsh, 23, read the book in university and says his experience with The Wealthy Barber affected how he manages his money.

“[Chilton’s] easy step of taking a lump sum from each pay cheque and putting it away into a separate bank account really makes the process of saving easier,” he says. “Since reading the book I have listened to his advice. I set aside $150 from every pay cheque and have it directly deposited into a savings account.”

Walsh says the book’s teachings were easy to grasp and allowed him to avoid playing the stock market. “It’s money you have set aside collecting interest at a very low risk,” he says.

Since June, Walsh has put aside over $3,000 to save for his future.

But with interest rates at an all-time low, some say Chilton’s teachings may not be quite as valuable as they were in the past. That’s what wealth manager at BMO Nesbitt Burns Bob Strachan says Chilton might address in his upcoming book.

“What he’s probably thinking is how do you balance the power of compounding with a low rate of interest,” he says. “How could you possibly save enough money if the going rate is three per cent? You don’t have enough years to live to generate the amount of money you’ll need.”

When The Wealthy Barber was first published, Chilton said you could expect 15 per cent interest in the long term, but financial professionals say that’s is not realistic in today’s environment.

“To expect those rates of return is ludicrous so I think you have to be realistic and expect a six, seven, eight per cent rate of return. That’s sort of the best case scenario today,” says Marc Lamontagne, a certified financial planner with Ottawa’s Ryan Lamontagne Inc.

Adjusting your rate of return

Chilton agrees that 15 per cent is “definitely too high a return figure” and says it is lower in more recent printings of the book. The calculation was based on the high interest rates at the time.

But Lamontagne says interest rates aren’t the only thing that have changed since 1989, arguing the book is just too simplistic to be applied to modern day planning.

“It advocates for people to become do-it-yourselfers and I think in this day and age a lot of the products and the tax rules are complicated. I think people should hire professionals to do their planning and investing,” he says, admitting his job may give him a bias.

But Walsh combined professional help with the book’s advice when he sat down to do some financial planning in June. An accountant helped him set up a tax free savings account for his money based on his interest in Chilton’s style of saving.

Another change in the investment landscape is the advent of Exchange Traded Funds – which are like mutual funds. The difference is that the investments are fixed or passive as it’s known in the industry, which requires less management and therefore requires holder to pay less commission.

Strachan’s colleague, investment advisor Michael Reyolds says the process of investing in ETFs is more complicated than investing in a mutual fund as the book suggested. But he says they are a major element of investing today and something Chilton might address in his sequel.

A SIMPLE LASTING MESSAGESome things don’t change with time though and Reynolds says there is still strength in the message of the original book and how it’s delivered.

He doesn’t think it’s a book people follow word for word, but rather a tool to make people aware of their finances.

“It’s much more of a planning book than an investing book ,” he admits, “but why I think it’s valuable is that it gets a person thinking about that at a young age.”

“I always liked The Wealthy Barber because it allowed anyone to sit down and get something out of it,” he says. “Over the years I’ve given that book to many people, including my children and they all read it pretty quickly.”

Though Walsh thinks the desire to save comes from the individual, he says it was the book’s ability to make it seem doable that made an impact.

“Its principle is simple and easy,” he says. “It shows us that a person with an average paying job – a barber – can save money and still not do without. He showed us that anyone with any job has the ability to save.”