In addition to tuition, most students have to fork over thousands of dollars per year to rent an apartment while studying in college or university.

But Carleton student Scott Hamilton didn’t want to throw money away each month, so he bought a house instead. “It just seemed to be a better investment to purchase something. […] And it is yours. So if you maintain something well, then inevitably if you decide to sell that, you reap the benefit.” 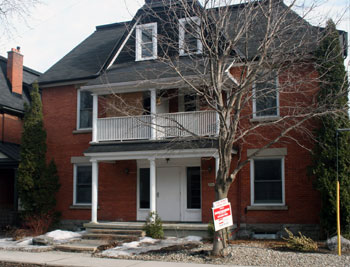 All fixed up and ready for sale.

He worked for two years after completing his first degree in psychology, earning enough money to go backpacking through Europe and put a down payment on a house for his next degree. He went in on it with his girlfriend knowing she would be able to make most of the payments the following year when she would be working full time.

“When it came time to move to Ottawa, I had saved up enough money from my previous job, as had [my girlfriend] Katie to put down a down payment on a house.”

Now, as he wraps up another undergraduate degree in political science, Hamilton and his girlfriend are also gearing up to sell the house at a profit, which will pay for his master’s degree. The couple has done several renovations to the house and Hamilton says he expects to make around $30,000, after factoring in the $7,000 he spent on upgrades.

“When I bought the house, it was not in bad shape, but I looked at it as an investment. […] So when I bought it I just decided I’m going to fix up every room, paint every room, rip apart the bathrooms and put in new counters and new sinks and new toilets and paint every wall.”

Hamilton says he and his girlfriend spend about $1,150 a month on their mortgage and condo fees. “Most importantly, we’ll get a return on our investment when we sell. So, we look at it as paying a tiny bit more now, for eventually getting all of our money back in the future,” he says.

However, qualifying for a mortgage is not possible for many students. A bank will want to see that you have a consistent income, says Farhaneh Haque, a TD bank regional sales manager in Toronto, for mobile mortgage specialists.

“We work off debt-service ratio,” Haque says. “So we look at your income and we look at how much of that is output against a mortgage or against other credit cards or property taxes, your utilities. The maximum of your monthly housing cost that you can have against your income is 42 per cent in order to qualify for a mortgage.”

She says a good way for students to “practice” paying for a mortgage is by having a pre-authorized payment plan to save money. She suggests students looking to get a mortgage should start saving that 42 per cent of their  income.

“What we do recommend if you are a student in third or fourth year, and you’re coming up to the end of your term at school, you should have considered pre-authorized payment plan. […]It’s a good way of setting money aside, so that when you’re ready for that purchase, it’s not a one-time hit,” Haque says.

While a home-owning student like Hamilton may be a minority, parents of university students can also make money from investment properties near campuses.

Rocco Liscio is an engineer-turned-real estate agent in the Durham region outside Toronto with the Sutton Group.

Liscio bought a house for his son near McMaster University and another for his daughter near Durham College and rented out the other bedrooms to fellow students. “I look at it as a cost-effective way to fund your children’s university education,” he says.

Haque agrees this is a viable option for investors. “Many investors look at that as a great strategy because they know that there is a consistent rental proposition,” she says.

“You look at a 30-year amortization period … and now you look at the interest rates and today you can make a five-year mortgage term at about four per cent.”

IT’S NOT JUST THE MORTGAGE

He says that would make your mortgage payments roughly $1,100 per month. Then you have to factor in other expenses such as property taxes and insurance. In this example, Liscio estimated the total expenses, including mortgage payments, would be roughly $1,800 a month. If the house had four bedrooms that were rented out for $550 each monthly, the revenue would be $2,200, bringing the monthly cash flow to $400.

In addition, Liscio says the investment gets better once you factor in what you have paid off on your mortgage.

“On an average you are paying $2,000 down [per year in the first years]. That’s money that effectively you’ve saved, it’s a pay down on your mortgage. So add that into your calculation of cash-on-cash return, and it turns out to be an even healthier percentage.”

Finally, if the property appreciates over the four years “it makes it even better still,” Liscio says.