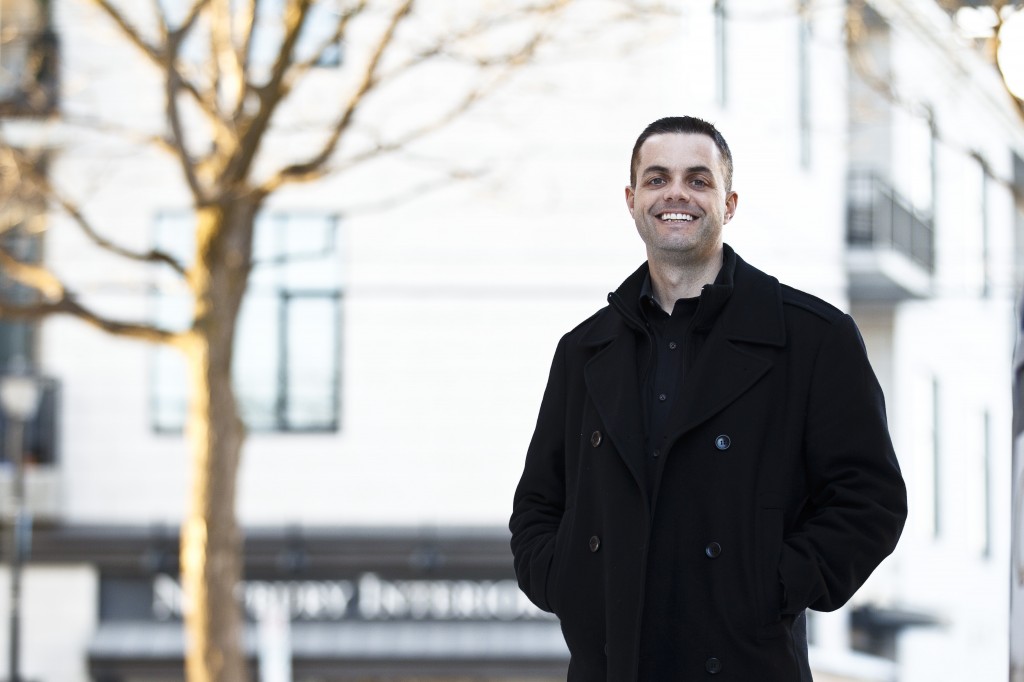 Paul Emond is the CEO of Ottawa-based Versature. The company uses the internet to provide phone lines to businesses.  Photo courtesy of Miv Photography, Ottawa

It may not be the sexiest buzz word in technology right now, but VoIP is quickly transforming Alexander Graham Bell’s historic invention. Voice over Internet Protocol is most commonly recognized on platforms such as Skype, Apple’s Facetime or Google Talk. Whenever you are using the internet to speak with someone live, you are likely using VoIP.

But today you do not have to be constrained by or connected to your computer to make a call over the internet. Internet-hosted phone lines, using classic landline telephones, are rapidly being adopted by businesses and consumers alike, because of the cost-saving potential.

Sean Hyatt has been relying on VoIP services for his home landline for two years. “I would never have another phone line again.”

He says he discovered the service out of necessity. “Rogers and Bell were no longer an option, plain and simple. They were charging too much for what I was getting.”

Hyatt says through the VoIP service he uses, NetTalks Duo, he gets unlimited phone service including long-distance within Canada and the United States for about $40 for the entire year. Hyatt says he was paying more than that each month on his old plan.

Still, relying on internet for a phone line is bound to lead to occasional outages.

“Once every two weeks there won’t be a dial-tone and you just need to refresh the power cycle. So you unplug it for about five seconds, plug it back in and it’s good to go,” says Hyatt. But when the Internet goes down all together, Hyatt is left to rely on his cell phone. While this may be a small price for Hyatt, a service outage could cost a business its sales and its customers.

THE COST OF MAKING THE SWITCH

Paul Emond is the CEO of Versature, an Ottawa-based VoIP service provider that was named small business of the year in the 2012 Ottawa Business Achievement Awards. He says his start-up business has grown 60 per cent year-over-year because of its excellent service.

“We’re always taking steps to make sure we’re redundant, so if one provider is down, we’re redirected to another carrier,” he says. Redundancy is key in the VoIP business: multiple internet lines are put in place to ensure that there are alternate routes for data to travel in case of an outage.

Versature continues to attract new clients around the country, but not everyone is convinced that hosted phone services are a viable option.

Bill Nachef is the owner of NuEdge Communications, another Ottawa-based business specializing in custom VoIP solutions. He says, until something technologically changes, phone lines should not be run on the internet exclusively.

“On a hosted solution if the internet goes down you have no phone line,” he says. Instead, Nachef offers his customers hybrid systems, meaning that they still maintain their traditional phone line while gaining new capabilities, for example, the ability to link the phone lines from two separate office sites into one system.

Occasionally, Emond admits, Versature has had short outages, affecting some customers. The company’s service guarantee promises that credits will be provided to compensate for problems. For a half hour outage, a customer will get a day of free service.

Emond says, the company has about 450 monthly clients and this number continues to grow.  Despite having no fixed contracts they have only ever lost a few customers that cited changing needs in their businesses.

“Every month we have to prove ourselves because we need to keep those customers,” he says. Emond says the company’s goal now is to continue attracting new business while maintaining a high standard for customer service.