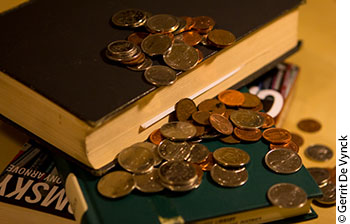 Some of the biggest decisions people ever make are financial ones: which house to buy, when to retire, how to pay for the kids’ tuition. Money links everything, and bleeds into life all the time.

What people know about money, their financial literacy, affects how they approach and make these decisions.

Canadians learn how to take care of their money from their family and friends, says Adam Fair, Director of Programs at the Canadian Centre for Financial Literacy, a group that trains community groups to teach money managing seminars.

Is that enough though? Canadian debt levels are climbing. People’s savings accounts are low. Since the 2008 financial crisis, it’s clear everyone needs to be aware of what happens in the economy – and how that affects investments.

WHERE ARE THE TEACHERS?

We need to be financially literate, but who’s teaching us?

Perry Quintin is the vice president of marketing for the Investor Education Fund. On its website the IEF says it is the “leading independent authority on financial literacy, education and research.”

The IEF reports to the Ontario Securities Commission, the province’s financial regulator, and is funded completely by fines and settlements collected by the OSC, says Quintin.

Every second year, she says, her group does a survey to find out just what Canadians know – or don’t know – about managing their money.

“General Canadian financial literacy is pretty low,” she says. “People aren’t saving, even though they think it’s a good idea.”

So the IEF has put together a range of tools, including an online game, to help people improve their skills. In 2010, they helped Ontario’s education ministry build a brand new elementary and high school curriculum to teach kids financial literacy.

“The number one financial concern during high school is saving for school,” says Quintin. “They’re actually saving for clothing, entertainment, technology and then school, in that order.”

But broad, sweeping curriculum doesn’t always work for everyone, says Fair. Not all students can afford clothing, entertainment and technology. Curriculum that makes assumptions risks alienating those who need financial literacy training the most, says Fair.

He says the same problem exists with the federal government’s “financial toolkit,” an online resource that tries to help Canadians learn about banking, mortgages, saving, taxes and investing.

The toolkit tries to be accessible and helpful to as many people as possible, says Fair, but it misses the specific needs of specific people in its bid to stay relevant to all.

Another problem with the kit, says social researcher and entrepreneur Brenda Plant, is that it skips the concept of socially responsible investing.

Plant started two websites – ethiquette.ca and ethipedia.net – that work to teach people how to invest their money in an ethically and environmentally-friendly way.

Socially responsible investing means putting your money only into projects that do not have negative environmental or social consequences. “Money is not neutral,” says Plant. “It takes on the value that you give it.”

Elementary and high school students need to know about these options, she says. Plant says she’s tried in both Ontario and Quebec to get her research on socially responsible investing included in curriculums, but has been rejected both times.

But provincial governments and the IEF aren’t the only ones who don’t put out a lot of socially responsible investment material.

Financial advisors often have misconceptions about what socially responsible investing is, says Sarah Thomson. It’s her job to convince them otherwise.

Thomson is an Associate Director at the Social Investment Organization, an umbrella group for investors, advisors and banks interested in socially responsible investing.

When people hear about investing responsibly or ethically, they like the idea, she says, but financial advisors often shoot it down because of their own biases.

“The individual doesn’t feel empowered enough to plow through and say, ‘No I really want this.’ They’ll defer to the financial advisor,” says Thomson,

Low-income Canadians get left out when it comes to personal finance in general too, says Fair. A lot of the curriculum is designed for middle and upper-income Canadians, be it the kind of words used, the reading level, or the sort of product and price range examples, he says.

Fair and his group say the most important thing when it comes to passing on financial literacy to someone else is trust.

“We actually identified community organizations as being a really good avenue to translate something that’s quite complex and something that they don’t have a lot of access to information and provide it in a way that’s respectful to their circumstances and tailored to their needs,” says Fair.

The consequences of financial illiteracy are real.

“If you’re someone with a middle or high-income you’ve got potentially a bigger buffer to make mistakes. When you’re living in poverty you’re living closer to the line. Every mistake is a big deal,” he says.

Regardless of point of view, Thomson, Fair, Plant and Quintin all say they agree Canada needs to meet the problem of financial literacy head-on.

“There’s a gap between knowledge and behaviour,” said Quintin.

More and more people are taking financial literacy programs: at public school, at colleges and universities, in the workplace and throughout adulthood.

“But on the whole across the country there is still a lot of work to do,” said Fair.