With Ottawans closing their wallets to luxury expenses during the economic downturn, locally-owned sports stores have avoided being another victim.

“People will usually cut elsewhere before they take their kids out of sports,” says Houle Sports Excellence owner Pierre Thibaudeau. “So recessions don’t really affect us.”

Houle Sports is in Orleans and focuses on hockey and soccer apparel. During the last two recessionary years, Thibaudeau says sales have remained the same. 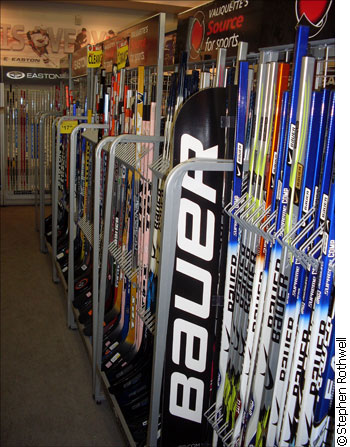 A rack of sticks a Valiquette’s Source for Sports

“We have been around for 20 years and are known in the community so we have a big base of customers,” he adds. “The numbers have remained at least the same, and since August the have been up.”

The results are the same across the city at Valiquette Source for Sports. More than two years into the recession and sales have not suffered.

“It’s been fairly level. It hasn’t grown but it has not decreased yet,” says owner Ralph MacLean. “It’s been down some months but we have always bounced back in later months.”

One thing MacLean has noticed in tough times is that customers are being more careful with their money.

“A lot of people try to be conscious about value. They look for deals like skates that come with a free stick,” says MacLean. “They also have spread out their buy, meaning [they] only [buy] one thing at a time, not all their equipment.”

One weapon these local stores have to battle box-store competition is a nation-wide buy in group. Houle Sports is part of the Sports Excellence group and Valiquette is part of Source for Sports group, each with over 100 stores in Canada.

This allows Thibaudeau and MacLean to buy top-of-the-line hockey gear and sell it at competitive prices – giving them an edge on some box stores according to MacLean.

“We specialize more in one sport than bigger stores,” adds Thibaudeau.

Caring for the customer

Another benefit of going local is personal service.

“We offer a higher level of service,” says MacLean.” Especially in the skate business, it’s based on reputation and service. We do proper fitting of the skates and offer quality skate sharpening.”

However small private sports stores aren’t without challenges and downsides, as Rob Goodman, assistant manager at Kunstadt Sports on Bank Street can attest to.

Kunstadt focuses on skiing, snowboarding, tennis and aerobic winter sports like snowshoeing, but was forced out of the hockey market because its product selection could not compete with the larger stores.

“Because of a couple of hockey only stores on Bank Street, we kind of bowed out of the hockey market,’ says Goodman.” If you want to focus on something, you want to have it covered. A person should be able to come in and get exactly what they need.” 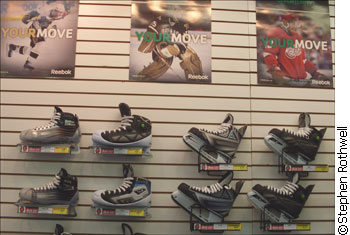 A specialty store can offers a wider variety of skates.

Goodman says that Kunstadt now plays more to its customers by specializing on fewer sports. He adds that all of the employees are knowledgeable about skiing and snowboarding because they are all actively involved in the sport.

“We are able to offer a higher quality of service. Everyone in our shop skis and snowboards so we can really help them out, so it’s a lot more honest.”

Kunsdtadt also faces the obstacle of a higher sticker price than most box stores because it is not part of group buying, though Goodman maintains that good service can always make up for a few bucks in higher prices.

Although Houle Sports and Valiquette Sports can compete with prices, Thibaudeau adds that they cannot compete with the advertising budgets of box stores because there is no group buying of advertising.

During the recession, stores like Kunstadt and Play it Again Sports saw their equipment buy back program – which deducts the cost of used equipment from new purchases – increase. Goodman says this kind of program helps his store compete with larger stores in terms of price.

Despite the recession, local sports have stayed afloat in a time when many stores have foundered.

“In a recession, people take better care of themselves,” says an optimistic Goodman. “In the summer we had a low point, but our bike sales were up because people were taking care of themselves and riding more, and as Christmas approached we could definitely see that the confidence was back.”