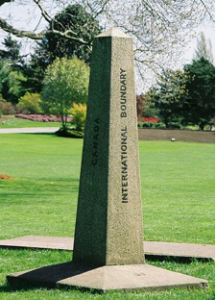 Providing for a family of six is expensive.

So Fernando Vasconcellos trys to find savings where he can – starting with the food they eat. Vasconcellos doesn’t go to his neighborhood Loblaws to do groceries for his large family. Rather, every month he drives for more than an hour, crosses the Canadian border and shops in the small border towns of Massena or Ogdensburg, New York.

Vasconcellos is my father. We moved to Ottawa five years ago and soon came to  realize  we could save money by shopping in the US. We assumed the hour-long trip was not worth it and any savings in the groceries would be offset by the gas used to get there.

But when we did the math, we realized that not only was the trip not that expensive, the gas actually paid for itself.

As Vasconcellos explains, it requires 15 liters of gas to get to Massena or Ogdensburg. That is a quarter of a tank for an average car. If the shopper arrives in the US with a quarter of a tank and then fills up, the savings on the three quarters of a tank are enough to pay for the gas used in the trip.

“After we realized the trip paid for itself and everything we saved there would be real savings, we started going every month,” Vasconcellos said.

Our family isn’t the only one that  routinely shops in the US.

According to a TD report in February 2014, more than 23 million Canadians visit the US every year, leaving $22 billion in the US economy. Eighty per cent of those are overnight or same-day trips.

However, things for cross-border shoppers in the near future.

“The weaker Canadian dollar in relation to the US dollar will reduce the incentive for Canadians to go shopping in the US,” said TD economist Jonathan Bendiner.

Vasconcellos has already felt it.

“Recently the lower Canadian dollar makes the trip to the US not as advantageous, but we still save enough on the groceries to be worth going,” he said. “We save thousands of dollars every year by doing that.”

The fact that Canadian residents are spending their money in the US has also caught the attention of the federal government.

In the 2014 federal budget, then-  finance minister Jim Flaherty proposed tackling “country pricing” by making companies explain when their products are cheaper abroad than inside Canada.

“It’s all a matter of reducing incentives for people to cross the border to shop,” he said.

Yet one does not need to travel to the US to benefit from lower prices there.

Derek Van Schie is vice president of Strader-Ferris International, a company specializing  in clearing products between Canada and the US. He provides a service called “My US address” where Canadians can shop online and send their packages to a Strader-Ferris’ warehouse in Ogdensburg. They can either pick up the packages themselves or have the company ship it to Canada.

“Sometimes products have free shipping within the US but are expensive to ship to Canada. If you live close to the border you can save by shipping it to us, then pick it up,” Van Schie said.

“We’ve been using [Strader-Ferris’] service for years,” said Vasconcellos. “We save on our groceries and use the trip to save on online shopping as well.”

“Even if the Canadian dollar falls to the point where it is not beneficial to shop in the US anymore, we will keep going just to pick up our packages,” he said.