Whether you babysit once a week or slug away at a summer job in the mall, tax advisers agree that you’re never too young to report the amount of money you earn.

“Essentially you should start filing as soon as you have any kind of income,” says Damian Laflamme, tax manager at the Ottawa accountancy firm Welch LLP.

Although it is unlikely that young people will generate enough income to owe the government anything, they should still be on the lookout for the benefits of filing sooner rather than later.

“It may turn out that you owe money, but it’s more likely – in the case of a young person – that you may be missing out on credits or money owed to you,” says Laflamme.

For just this reason, Carleton University’s Sprott Accounting Students Association set up a tax clinic on campus at the beginning of March to help fellow students prepare their own personal income tax returns.

“There are a bunch of credits that young people, as students, can be getting,” says a volunteer at the clinic. “For instance, even if you’re not working but you start claiming tuition, you have the option of carrying tuition credits forward. That way, when you do have a job later on, you can apply those credits to your taxable income.”

IT GETS BETTER WITH AGE

While your first return might not be very high, Adam Salahudeen, director of tax advisory services for the entire Wealth Management division of Scotiabank, says starting early can only help to put you in good stead for the future.

For example, he notes that filing a tax return opens up more contribution room in a tax-free savings account. In this account, which can be opened at 18, contributions – and any interest gained on them – are not taxable.

“So if I make a yearly contribution of up to $5,000 for 35 years, with a rate return of six per cent, I would have over half a million dollars saved before I’m even ready to retire,” says Salahudeen. “It’s an excellent way to set money aside throughout your lifetime.”

And the same contribution room can be created in a Retirement Savings Plan, which is why Laflamme has his 16 year-old daughter – who just started working at a Shoppers Drugmart last year – already filing a return.

“She couldn’t be further away from retirement,” explains Laflamme. “But when she does have a job and she does have a taxable income, she’ll be able to contribute more to her RRSP.”

It also never hurts to start developing a good track record with the Canada Revenue Agency, the same way you might get a credit card when you’re young to start building a good credit score.

The people who wait until they think they are making enough money to warrant filing a return are usually the people who get burned by the CRA.

“These are the people who are 25, 26 and going to tax lawyers and accountants saying they haven’t filed their taxes for seven years,” says Salahudeen. “Now they’re scared to start, scared of getting audited.”

He calls it the “ostrich effect” and the longer you wait, the worse it gets.

Although the CRA does not give a precise age by which Canadians must file their first return, Laflamme urges his clients to start before any money is owed.

“It’s about making a good habit of filing on an annual basis,” says Laflamme. “If you get into the working world but continue to think ‘I don’t need to file my taxes now’ or ‘I’ll just file them next year,’ you’re going to run into a lot trouble.”

For those young people who remain unconvinced by long-term gains, there are some immediate payoffs to get those tax returns in.

If you work and go to school at the same time, filing a return can help to ensure you’re not paying tax unnecessarily. According to Laflamme, some employers may know to withhold income tax from your pay because they assume you won’t reach the income level that requires you to owe anything, but others might not. 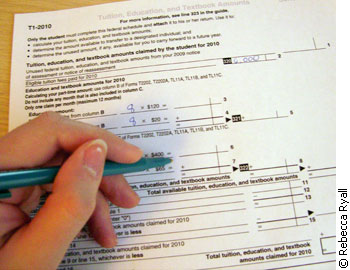 It’s easier to do on a computer.

“A student may work over the summer and earn $10, 000 but, if they have personal tax credits or tuition credits outstanding, the tax they owe could be greatly reduced,” says Laflamme.

Another good example: if you’re over the age of 19, you could be eligible for the GST or HST credit. This credit takes the form of quarterly rebate cheques issued by the government throughout the year.

If you’re a student living away from home you can also claim your rent under the Ontario Properties Act.

Still, according to Salahudeen, the greatest benefit from filing young is the benefit of time.

“Time to build up your savings and to build those good filing habits.