Tax software is so popular these days that even H&R Block has its own. In fact, most accountants will use a professional version to do their work.

So is there any reason to take your taxes to a tax professional or an accountant anymore? 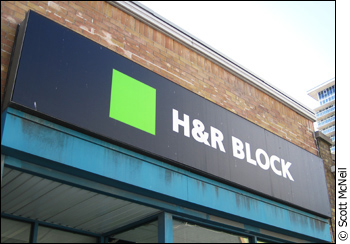 The traditional place for people to go who can’t do their own taxes.

For most Canadians, software will do. However, there are still a few cases where having a human being look over your taxes could save you time and money.

For most people with just a simple return, software is enough says H&R Block Tax Analyst Cleo Hamel. In fact, she even recommends people do their return by hand first so they better understand how taxes work.

“If it’s a simple return, then do it by hand,” he says. “It lets you learn the structure.”

He adds software can sometimes give a false sense of security, and it sometimes won’t catch things you would manually.

“A lot of people don’t claim things they’re entitled to because they don’t know,” he says.

“You need to really ensure that you complete the process,” she says.

HAND IT TO A PROGRAM

Geoffrey Morgan, communication manager for Intuit Canada, which makes the program Turbo Tax, disagrees. He says its software is complex enough that it won’t let you do something wrong. It interviews users to find everything they can claim and makes sure it gets all the important information.

He also says the program lets you look at the actual forms too, allowing you to understand what’s happening as though you were doing it by hand. He adds that filing online means you get your return faster.

“A lot of income tax legislation, it’s not black and white, it’s gray.”

However, Hamel points out that H&R Block will give clients an advance equal to the amount of their return on the same day they come in.
MacGowan admits tax software has improved.

“They’ve gotten to the point where they’re fairly good,” he says.

He adds that it’s important to distinguish between an accountant and a tax preparer, like H&R Block. He says he often tells prospective clients to use either a tax preparer or just to use software, especially when they’ve only got one source of income.

He says it only makes sense to use an accountant, which will cost significantly more, if you have an extremely complex return. He also says an accountant can help if the law isn’t completely clear on what you’re claiming.

“A lot of income tax legislation, it’s not black and white, it’s gray,” he says.

A good example is a sole proprietorship business, where the tax on the business is claimed as income tax. In this case, he says, it’s not always clear what you can claim and what you can’t. Other examples where an accountant can help include using tax shelters, complex investments and share exchanges.

Morgan admits there may be scenarios when an accountant should be consulted but says he hasn’t seen one.

“I’ve yet to see a tax scenario that tax software couldn’t handle,” he says.

Medium and large accounting firms will typically charge $500 or more to prepare an individual’s taxes, while a tax preparer will charge less than $100.

Software ranges in price. Turbo Tax for students is free, while an online tax return for non-students costs between $15 and $40 for Turbo Tax, UFile and H&R Block. Professional and home business versions typically cost around $100.

All three options also provide help in the case of a review or an audit.

Doing it this way means you have to add it up yourself.

The biggest hassle when getting audited, says Morgan, is the time. He says Turbo Tax offers a service known as “Audit Defense” for 39.99.  A representative will coordinate and attend meetings with the Canadian Revenue Agency and make sure you have the information you need.

MacGowan adds accountants can be helpful under such circumstances because they are used to dealing with CRA agents. He says people without experience will sometimes accidentally answer questions in a way that draws suspicion, and that this can lead to a full audit instead of a basic review.

For most people, with a single income and simple investments, getting audited isn’t a big risk, and reviews can be quite simple. In this case, tax preparation software is all someone needs.

“What people want to know is that their taxes are being completed properly and they want it to be easy,” says Morgan. “That’s why we designed (Turbo Tax) to be easy.”

So, if you’re not investing in tax shelters or running your own business, you’re probably fine just using tax software. But if you’re planning on pulling some fancy tax tricks, maybe it’s best to keep an accountant on call.