Chi Wing Hung made his first foray into the stock market about 15 years ago when he was a university student, dabbling in minor trades in his portfolio.

“It was casual more than anything…on and off,” he says.

Now in his thirties, it’s pretty much the same story. As a self-professed amateur stock trader, his biggest holdings are in Apple and Cisco, as well as other high-tech companies. Hung also has some shares in oil and other commodities, dating back to a stint in Texas when he worked for an oil company.

Hung says he chose those stocks because those are what he knows. Over the last decade and a half, he estimates he’s put about $50,000 into building up his portfolio. And although the companies that he’s chosen have recently done very well, he still doesn’t know whether those investments will pay off for him in the long run. 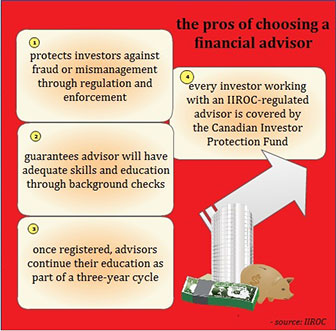 “I do my own research, see what’s a good pick, and then go from there, essentially,” he says.

Hung’s strategy is a common one. According to Statistics Canada, there were more than 3.7 million investors in Canada in 2010, and many of them are bit players in a market where they make their own trades and pick their own stocks.

And although they do their best to calculate which stocks will give the best returns, many small-time investors just pick based on consumer news and trends – which can leave them open to losses.

“Risk isn’t something (many smaller investors) consider,” says Luis Seco, director of the Risk Lab at the University of Toronto. “Even large institutions don’t really do risk management.”

At the Risk Lab, Seco and about 14 other researchers try to determine how math can predict financial losses. That lab spun off Sigma Analysis and Management, which acts as a consulting company for larger institutions who want to build their investment portfolios without taking on too much risk.  Seco is the company’s CEO.

Seco says adds his company usually tells its clients to invest in hedge funds, which are low-risk and stable. Sigma also advises his clients to maintain investments that complement each other, ensuring that risk is spread evenly.

“One of the nice things about risk management is that…without having to spend any money, you can have a portfolio whose return pattern is much more stable just because of the offsetting characteristics of each component,” says Seco.

But he cautioned while this is all easy to understand and may even seem like common sense, it’s difficult to put these tips into practice. That’s where an advisor can step in and show a client how it’s done, he says.

Paul Riccardi, the senior vice-president of enforcement, member policy and registration for the Investment Industry Regulatory Organization of Canada, says it’s even better to hire a regulated financial advisor.

His organization oversees more than 200 Canadian securities dealers in 12 different markets. It also does background checks on anyone who wants to become a financial advisor and work at an IIROC-approved firm.

“There’s an enormous amount of information that’s available to people, through the Internet, through magazines and a variety of sources,” says Riccardi. “And I think a lot of people believe they have the ability to prioritize and understand the information, understand the market, and feel that they can do a good job managing their own portfolio.”

But he also adds there are many advantages to working with a regulated dealer, whether it’s someone who just fills out securities orders for his or her clients, or a financial advisor who provides a full spate of tips and services.

For one thing, a registered dealer is less likely to commit fraud, Riccardi says. But he also says there’s a convenience factor in working with someone who can help pick out the right stocks.

Hung says he still wants to go it alone because he thinks he’s doing just fine. However, he admits neither he nor his friends can really afford to play guessing games with the market.

“My friends don’t tend to blindly pick,” he says. “They have mortgages, they’re thinking about retirement, so they don’t go blindly into anything.”

While Hung says he may not be making too many changes to his portfolio anytime soon, he’ll still keep checking his stocks everyday – and trust that he’s making the right decisions.