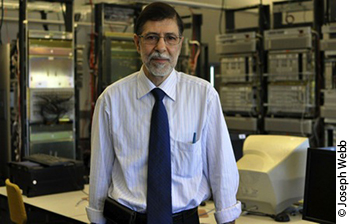 Hussein Mouftah in a computer research lab for the first responder network located in the University of Ottawa SITE building.

The University of Ottawa and the Canada Advanced Technology Alliance (CATA) recently partnered to use Highway 417 as a test-bed to improve communications between fire, police, and paramedic services. The partnership means the university will devote wireless network research to the hardware, software, and infrastructure needs of emergency services.

“It is not really a surprise to see people interested in establishing this in the region,” says Hussein Mouftah, Canada research chair in wireless sensor networks and the University of Ottawa professor directing the research.

Some other local partners in the project are: QNX Software Systems LTD., the Ontario Ministry of Transportation, and the Department of National Defense. QNX is most recently known for its involvement in building BlackBerry’s newest operating software. The company is also involved in emergency dispatch and vehicle computing systems.

The test-bed will run the 20 km between the university and the communication technology company Alcatel-Lucent’s Kanata office. Alcatel-Lucent has city permission to erect its LTE, also known as 4G, antennas on city buildings along the route.

The addition of LTE wireless technology will give first responders the capacity to stream video and transfer documents between dispatch and emergency vehicles. Emergency services now use radio, which lacks these abilities.

Communication between first responders became increasingly important in the U.S. after the September 11, 2001 terrorist attacks and Hurricane Katrina.

“It is going to be a different world when an ambulance can go to a scene of an accident and have an HD camera at the front of it so the doctors at the hospital can, as it were, look through a magic window and be there at the accident site,” says CATA executive director, Barry Gander. “That is going to save thousands of lives.”

The three-year project is currently on time and Mouftah says the antennas could be in place by mid 2014. Once in place, first responders will test the network and make refinements.

He says there are now approximately six researchers working on the project and this number will double, if not triple, within the year.

In addition to infrastructure, the vehicles and personnel require hardware and software that will connect to the network. The hardware-software combination will make emergency vehicles networked vehicles.

Michael Sullivan, a vice chair at the Canadian Interoperability Technology Interest Group (CITIG), says the equipment must be suitable for dangerous situations.

“Everything has to be public safety grade,” says Sullivan. “There are many companies working on that that would be delighted to receive the business and the challenge.”

Gander says Ottawa was selected for the test-bed because of the existing high-tech knowledge base and the diplomatic community’s additional security needs. Gander co-founded the Networked Vehicle Association after American technology companies – HP, IBM, and Cisco – asked CATA to create an organization to promote networked vehicles.

“This was interesting to us because they realized that in Canada we can gather together all the parties responsible for a conversation faster than in the United States, where there are so many groups.”

The expectation is that the network will link with other wireless test-beds across North America.

The 700 MHz spectrum needed for the LTE network became available when both Canada and the U.S. switched from analog to digital television. The US government has alotted 20 MHz of bandwidth within the 700 MHz spectrum to public safety services. Industry Canada has set aside 10 MHz. More bandwidth allows for faster and more reliable data transfer.

CITIG, which represents Canadian emergency service associations, has been petitioning Industry Canada for the same frequencies set aside in the U.S. CITIG claims more bandwidth will make the network more reliable. It will also improve compatibility with similar services across the border.

Industry Canada’s auction for frequencies in the 700MHz spectrum for commercial purposes could happen in late 2013.