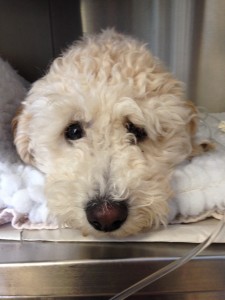 Two years ago, with all of their kids off to university, my parents filled their empty nest by getting a puppy. They settled on an adorable three-month-old bichon-poodle named Charlie, who happened to be a bit high-maintenance. He preferred deli meats and string cheese to his kibble, and my parents bended to his every whim.

One morning when Charlie was 10-months-old, he refused food and water and began vomiting. After taking him to the vet, my parents were told Charlie had a severe case of pancreatitis, an inflammation of the pancreas, resulting from a fatty diet. After multiple blood tests, ultrasounds and IV fluids, Charlie was back to his normal self, but my parents were served with a $3,500 vet bill.

My parents were shocked at the high cost of an emergency procedure for a pet. Charlie was still a puppy, and they hadn’t planned for such a costly surgery. The vet recommended looking into pet insurance.

Even though there are 14 million dogs and cats in Canada, according to Canada’s Pet Wellness Report, it’s estimated that less than five per cent are insured. In Britain, 40-50 per cent of pets are insured.

Pet insurance allows pet owners to have security in emergency situations, says Alison Cross, spokesperson for the Ontario Soceity for the Prevention of Cruelty to Animals. “There are surprises that can happen at any point in your pet’s life,” she said. “Pet insurance protects you so you’re not sitting in a situation where you can’t care for your pet because you don’t have the funds.”

In Canada, there are four main pet insurance providers and pet insurance can cover some or all of veterinary bills, emergency surgeries and medicine, depending on your plan. Owners pay a monthly premium, a deductible for a claim and a portion of medical costs. Plans range from $8-$100 a month and cover 50-90 per cent of pet-related bills.

Not all pet owners believe that insurance is necessary, as is evident from the low number of pets insured. Pet insurance doesn’t seem essential to owning a pet, according to Erin Schroeter, a 21-year-old student and owner of a three-year-old rescue cat named Oreo.

“My vet has never recommended it to me, and when I used to volunteer at the Humane Society I only heard insurance being mentioned if the animal had a known medical condition,” said Schroeter.

Pet insurance doesn’t have to be the only option though, says Cross. She suggests setting up a savings account for emergency situations, sort of like an RRSP for your pet, if that suits your needs better.

Yet there are risks with this method, says Randy Valpy, founder and ‘Top Dog’ of Pets Plus Us, a Canadian pet insurance company. “Say you put $25 in a month and three months later your cat gets cancer or your dog gets hit by a car. Seventy-five dollars will barely get you in the door of any clinic, let alone pay any bills.”

Valpy adds that even if you save for multiple years, when the roof of the house needs fixing, or the car needs to be taken in for repairs, very few people are disciplined enough to leave the pet’s savings alone.

All pet owners should try to find a way to include pet insurance within their budget, says Valpy. He says his company has tried to address people’s biggest critique of pet insurance: its lack of value if you don’t have to use it. Pet Plus Us does this by providing customers with a 24-hour emergency line, a subscription to pet-oriented magazines, a collar, a tag and registration to a lost and found website.

“Most pet owner’s don’t have any conception to what the potential costs are to a pet getting sick,” said Valpy. “It’s expensive enough just having a pet, if your pet gets sick or an accident happens, the bills can rack up in the thousands and without pet insurance, the choice for many owners may have to be to put their pet to sleep.”