Christian Faigen came to Algonquin College in Ottawa from the  Ottawa Valley town of Eganville five years ago to study computer engineering technology and had to borrow money to pay for it.

That decision to go into debt changed Faigen’s life. 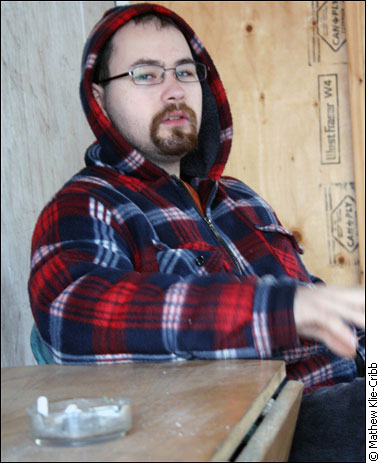 A tough year and all that debt too.

Taking on student debt is getting riskier.  Students hope education will  give them a  good job =  that makes it easier to pay back their loan. These days though  if  those who make it through school,  may  discover the well-paying jobs are hard to find or just not available.

“The student debt crisis is a national economic syndrome plaguing Canadian youth,” says Jean LeBlanc, owner of Canadian Financial Wellness Group, a credit counselling service on the east  coast.     It’s getting harder for Canadian youth to pay for post secondary education, and it’s just as hard for them to stay enrolled, says LeBlanc.

“The economic barriers are just too many.”

“But people are forced to grin and bear it,” he says, “Because without education unfortunately people don’t have a hope.”

For Faigen, the risk of taking on debt did not pay off.

LITTLE ROOM FOR THE UNEXPECTED

He hit a  tough semester. A salad dressing spill fried his computer’s hard drive. He missed four labs and couldn’t catch up.

When he dropped the course, the Ontario Student Assistance Program (OSAP) said he no longer met their minimum 60 per cent course-load requirements to keep his full funding, says Faigen.

“It basically came down to which is more important, roof over my head and my bills being paid, or school,” he says.

Faigen admits he mad mistakes. He says his marijuana habit was also a factor in his school failure. It was his first time away from home and he went a little crazy, he says.

He’s not the only one.

Young people leaving home for the first time are not used to having to manage so much money, says Joel Grisé, credit counselling coordinator for K3C Credit Counselling.

“I’ve come into contact with a couple of people who have gotten their student loans and went to the casino and gambled it all,” he says.

Poor judgment is not the only reason debt causes students to drop out and have trouble repaying.

The fear and stress associated with debt, and even the hounding of collection agencies, causes students to become depressed, frustrated and distracted from their studies, says LeBlanc.

“People fear that the size of the debt they own is going to survive them.”

But even students who make it through school have trouble repaying their debt.

Students are facing higher levels of debt, and many of them can’t find jobs in their field so they have to accept lower pay, says Pat White, executive director of Credit Counselling Canada.

Students can try to decrease the risks by thinking about how realistic it is to find a job in the field they are  studying, she says.

Even though education is  leaving many students in difficult debt situations, there are many programs in place to help you get out of debt.

The first is interest relief.

If you can’t get a good job when you graduate, then you can apply to stop OSAP from charging you interest on your debt, says Grisé.

Interest relief lasts for up to five years.

Faigen has been on interest relief for three years already.

You can only get interest relief if your interest payments are up to date, says Grisé. When you finish school you have six months to contact your national student loan centre to make payment arrangements, but a lot of people who  believe they don’t have the ability to pay just don’t call, he says.

Financial institutions start charging interest anyway, and after a few months,  the accumulated interest might put the interest relief program out of reach, says Grisé.

“You have to catch up on your interest to go on interest relief,” he says.

If interest relief still isn’t helping, the next step is called revision of terms  under which OSAP rewrites  the student’s repayment contract.

There is also the forgiveness program where government would just waive  the debt, says White.

“It’s kind of like going bankrupt, but bankruptcy legislation doesn’t allow anyone to include student loan debt unless they’ve been out of school for seven years,” she says.

People were graduating, not finding jobs, and a year later  declaring bankruptcy. The government says that’s not fair to the creditors who would lose their loan repayments.  believing that students should spend seven years searching for a good job before they can go bankrupt, says White.

It remains on your credit file, in bold letters, for seven years, he says.  Its also a public record, so any time you want to apply for a loan you have to tick the little box that asks if you’ve ever been bankrupt, he says.