John* is a 28-year-old bartender working in Ottawa, Ontario.

He has worked for six years in the industry in two different provinces and briefly overseas. Currently, he serves cocktails, pints and pitchers at one of Ottawa’s biggest clubs. 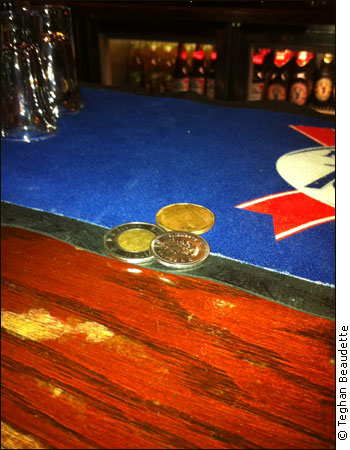 Does the Canada Revenue Agency know?

He estimates that he makes about $40,000 to $45,000 a year, the vast majority of that in tips from customers. But when tax time comes in a few months, that won’t be the amount indicated on his tax return.

John gets paid $8.90 an hour by his employer—$1.35 under minimum wage. According to the Ontario Ministry of Labour guidelines, anyone who serves alcohol can be paid less, presumably because their income is offset by tips.

If the tip is left in cash (there’s no paper record like a credit card or debit slip that can be traced), the Canada Revenue Agency never hears about it. If it’s left on a debit or credit card bill and there is a paper trail, not reporting becomes riskier. The Canada Revenue Agency could ask the restaurant to produce those receipts at a later date. But, as a bartender, most of the tips John receives are in cash, and he’s not worried about getting caught.

“I’m not worried about getting caught because there are hundreds of thousands of workers in the restaurant industry in Canada who are doing the same thing,” he says.

“If you’re a server, part of your tips will be in cash. That could disappear without trace. There is a general understanding that the differences are part of their salary,” Brouard says.

If you have to find money, should that group be your target or should it be wealthy people?

Early in January 2010, Bloomberg reported the National Revenue Minister, Jean-Pierre Blackburn, said over 8000 Canadian taxpayers had reported $1.7 billion in previously unreported income. The information had been offered voluntarily from Canadians at home and abroad.

But Brouard says that amount likely didn’t include much in unreported tips and gratuities.

“I’m not sure it’s a big problem. The amount not reported—is it that big for restaurant employees? It’s usually younger people working at lower wages,” Brouard says. That means they are likely in a low tax bracket and wouldn’t pay a lot of tax on whatever they earn.

“If you have to find money, should that group be your target or should it be wealthy people?”

So far the CRA seems to agree with him. In September 2010, the federal government announced it was auditing more than 1,000 Canadians they said were associated with off-shore bank accounts that may have been set up to avoid paying taxes in Canada.

At the same time the CRA said in a press release that it had already uncovered more than $1 billion in unpaid federal tax from Canadian taxpayers hiding assets and accounts offshore or through “other international transactions.”

Audrey Lalonde, the Manager of Communications for the CRA, says “Canada’s tax system is based on voluntary compliance and self-assessment. Our fundamental approach is to encourage individuals and business to comply with their obligations without our intervention.”

“We believe that promoting voluntary compliance is the most cost-effective way to administer taxes in Canada,” Lalonde added.

I can still get EI, and I don’t plan on losing my job. You just have to be careful with your cash.

Even though the CRA has no way of tracking cash tips, there are downsides to not reporting your income. Brouard is quick to point out if you’re not reporting your full income, you could have difficulty getting a mortgage or any other loan from a bank, and your CPP and EI benefits would also be affected.

If the CRA did catch onto John or one of his co-workers, Brouard says they could be reassessed, audited or face steep financial penalties.

John says he’s not worried about getting caught, and as far as the benefits of declaring his income are concerned, “I can still get EI, and I don’t plan on losing my job. You just have to be careful with your cash,” he says.

Statistics Canada estimates that for every dollar spent at Canadian restaurants, $1.85 in spending is generated in other areas of the economy—much higher than the national average of spin-off benefits for industries in Canada.

It also estimates the restaurant and foodservice industry in Canada directly employs more than one million people, and it generates an estimated $60 billion in sales annually.

But if part of that money is 10 to 20 percent of a bar or restaurant bill and is left in cash at a table, the Canada Revenue Agency may be satisfied not knowing about it.

*Name has been changed to protect the identity of the person interviewed.