In Ontario, when you want to buy a bottle of wine for your dinner party, you only have one option.

And while you may not think about it when you pick up that bottle of 12-year-old Cabernet Sauvignon, the Liquor Control Board of Ontario is more than just a store. 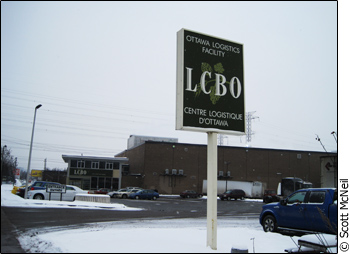 The centre for all eastern Ontario alcohol.

The LCBO – as it’s better known – is a provincially-owned corporation, with a monopoly over alcohol distribution in the province.

It’s also the largest alcohol distributor in the world. There are some big benefits to such an enormous size, but there are also some big challenges organizing such a huge operation.

The LCBO buys alcohol from all corners of the globe. Its the companies huge size that allows it to buy such a wide variety of products, says VP of logistics, George Soleas.

That size even allows for private ordering, which Soleas says also improves its selection of products.

“The world is our shopping basket,” he says.

Shipments are brought through Montreal, New York and Vancouver where the containers are put on rail cars and sent to Toronto.

Labour troubles at ports cause the company headaches, he says, whether they’re in Europe or in Montreal.

Natural disasters, such as the earthquake last year in Chile, also cause nightmares. In the summer of 2010, low water levels in the St. Lawrence Seaway meant many shipments had to be re-routed through Halifax.

With such a large system, it’s important to keep hiccups to a minimum, before they disrupt the whole supply chain.

“If there’s a delay, there’s a cascading effect,” says Soleas.

To smooth out the shipping process, the LCBO contracts with freight forwarders. There job is to ensure that shipment with that wine you want reaches its destination in time and is handled properly.

“They have to make sure it doesn’t freeze, that it doesn’t bake,” says Soleas.

Shipments are brought through Montreal, New York and Vancouver where the containers are put on rail cars and sent to Toronto.

Getting the product onto shelves

From Toronto, products are shipped to one of five warehouses located around the province.

The largest, just north of Toronto in Durham, handles 60 per cent of the LCBO’s volume. 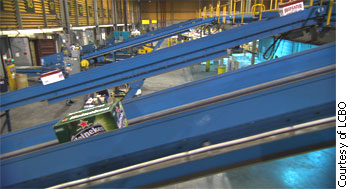 This warehouse is so large, says Soleas, LCBO designed a specialized warehouse management system for it. All the warehouses are connected to the company’s mainframe to keep things coordinated.

The second-largest warehouse, in London, services south-western Ontario. Around 22 per cent of the company’s total shipments go through this warehouse.

The third-largest warehouse is in Ottawa, which handles Eastern Ontario and receives around 12 per cent of overall shipments.

Another smaller warehouse in Toronto mostly handles the LCBO’s Vintage line and private ordering, while the smallest warehouse is located in Thunder Bay.

These warehouses also ship to Brewers Retail Inc. – better known as The Beer Store – as well as products for restaurants and bars. So when you need a flat of beer, or go out for drinks at your favorite bar, you’re getting LCBO products too.

Unlike The Beer Store, the LCBO doesn’t have its own fleet of trucks. Instead, it contracts-out all of its trucking services.

In total, the LCBO employs 650 people in it logistics department to coordinate such a large operation.

Soleas says the LCBO often uses multiple trucking companies at any given time. They are selected, he says, based on price and and a host of other requirements.

Trucks that deliver wine and spirits from the warehouse to stores, in particular, need to have specialized equipment because the store loading docks are not all the same.

Once product reaches one of Ontario’s 616 LCBO stores it is moved to the shelves, ready for purchase.

In total, the LCBO employs 650 people in it logistics department to coordinate such a large operation. This includes people who specialize in customs brokerage, traffic and analysis.

The system isn’t static either. Soleas say the company continually re-evaluates its operations and often re-organizes on a year-to-year basis.

So the next time you pick up a bottle of wine at your local LCBO, keep in mind that it did not just appear there. It has had quite the journey.