In a residential area just past the South Keys shopping center in Ottawa’s south end, is a quaint, two storey, red brick house with a painted sign reading The Wine Station out front. 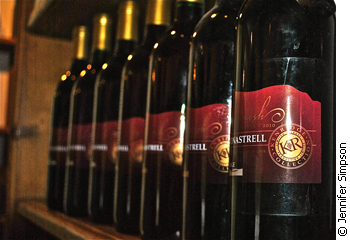 Waiting to be filled.

The pathway up to the patio is covered in snow and cars fill the parking lot on this January afternoon. Walking up the front steps, the door opens automatically, as if the store was just waiting for your arrival.

Inside is the warm inviting smell of wine and a low hum of conversation.

The walls of the front rooms are lined with everything a wine maker could dream of – from kits to make your wine at home to a decorative oak wine barrel with a massive cork in the top.

Stepping to the back of the store, there is the cash register with a few people milling about and a bottling station that automatically fills and corks the wine made here.

Beyond the area meant for the general public is a large storage room, filled with the creations of Wine Station customers. The lighting is dim but the smell of wine is strong and massive plastic jugs on shelves fill the walls.

Peter Ananny opened The Wine Station in 1992, originally operating under the name The Brewing Station but when he moved exclusively to wine-making, he changed it to The Wine Station.

“We basically fell into (the business),” Jason says with a laugh. His father was inspired by the idea of being an entrepreneur and had a passion for wine. He melded the two interests together and thought the business would be something special, Jason says.

“If you’re going to be in business, wine is kind of a fun business to be in,” he says. “But you have to have the right business knowledge and experience and passion. If you want to be the best in any field, you have to have passion.”

Customers taste the grape juice musts and choose what type of wine they want to make. Jason says about 60 percent of the wines people make here are reds and 40 per cent are whites. The most popular is an Australian shiraz, followed by a cabernet and a merlot.

Customers then pour a tiny packet of yeast over a huge vat of the juice must and that’s the only hand customers have in the actual wine making process for four weeks.

At day 14, the wine is transferred by machine from the first container with the spent yeast, to a new container where it becomes clear wine.

“It’s not like you’re making home-made cookies,” Jason says, noting the Wine Station cheats a little bit with the pre-made grape juice must coming from Niagara.

“We’ve got all the expertise behind us, so it’s more like instant wine,” he says. “(The customer) isn’t working that hard to make it.”

The wine is kept in plastic jugs in a temperature-controlled storage room at the back of the store while the Wine Station handles the trickier parts of the wine-making process.

At day 14, the wine is transferred by machine from the first container with the spent yeast, to a new container where it becomes clear wine.

Then, the wine naturally stabilizes so that corks don’t “pop at midnight,” Jason says. This is a natural process where the sugar has completely been eaten up by the yeast, making the juice must into wine.

The next step is sterilization- this protects the wine from oxidization, preserving it. It is sterilized by adding a special preservative to the wine.

Filtration is the last step before customers return to the Wine Station to taste and bottle their orders. An employee transfers the wine from one plastic jug to another via hose. This step polishes the wine, Jason says. It makes sure there is no more sediment or anything else used during the wine making process left in the batch.

After those four weeks are up, customers return for their bottling appointment.

The Wine Station has a satisfaction guaranteed policy- so if customers don’t like how their wine turned out, they can make something else at no additional charge. 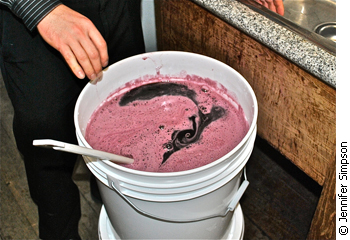 The start of the wine-making process.

“We want to make sure that you love your wine,” Jason says. “We’re only as good as the last bottle going out to the public.” Jason says they try to treat their customers like family and offer the best service possible.

The lower price of the finished product is a huge selling point for this company.  There are no commercial taxes, like beer and wine taxes paid by LCBO customers because Wine Station customers are making their own wine.

In addition, the per-bottle cost of customer-made wine at the Wine Station is $2 to $5.50, dependent on the type of grape juice must selected by the customer. For a 28-bottle batch (the minimum offered by The Wine Station), the total cost to the customer is $60 to $160.

He also notes that making wine here is greener in that customers make one or two trips to The Wine Station and will always have wine on hand, rather than driving to the LCBO several times throughout the month.

While The Wine Station primarily focuses on wine wine-making, but customers can also make their own apple cider, champagne, port or sherry.

Jason credits his father for the success of the business. “If it hadn’t been for my dad, I don’t think we’d have been where we are,” Jason says.