In downtown Ottawa, it’s common to find vehicles with Ontario license plates having come across the bridges from Quebec with trunks stocked with cases of beer.

It’s easy to understand why this happens, simply by comparing prices.

In Ontario, The Beer Store sells a case of 24 bottles of Coors Light for $33.95. In Quebec, the Super C grocery store located minutes across an interprovincial bridge is having a sale on Coors Light this week – $21.38 a case. 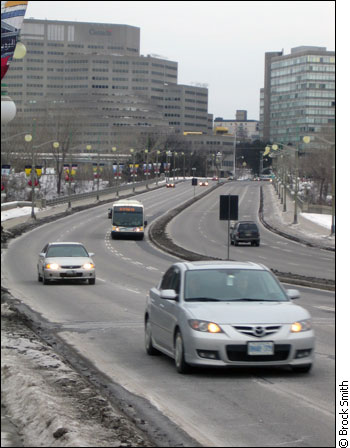 What’s in those trunks coming back to Ontario?

So what’s stopping a resident of Ottawa from crossing into Gatineau and buying a case of beer or a bottle of wine? In practice, nothing, but in theory it’s a different story.

If the price of gasoline isn’t enough, people should be deterred by the fact that bringing alcohol across provincial borders is illegal.

Yet when a bridge or a line on a map is all that separates you from lower prices or greater selection, it’s a law that’s impossible to enforce.

The restriction is part of a prohibition-era law, The Importation of Intoxicating Liquors Act of 1928, that gives provinces the authority to manage alcohol by setting up their own liquor boards. Ultimately this law enables provinces to close their borders to the free movement of alcohol.

If you haven’t heard of this law before, you’re not alone. A 2008 Harris Decima survey found 76 per cent of Canadians were unaware of the law, and 74 per cent, upon learning about the law, thought it was unreasonable.

With three-quarters of Canadians both unaware and opposed to this law and Ottawa residents able to break it with impunity, how do the LCBO and The Beer Store manage to generate revenue in Ottawa?

For the LCBO, fighting the lure of interprovincial competition involves selection as much as price.

In order to compete with Quebec, where some wines and beer can be bought at corner grocery stores, the LCBO helps consumers legally circumvent interprovincial restrictions.

LCBO spokesman Chris Layton says the board has responded to an increased demand for out-of-province wine in recent years.

“We have more than doubled the number of B.C. wines we carry over the past two years,” says Layton. “We have also reached out to wine industry trade associations in other wine-producing provinces, and have encouraged producers in other provinces to submit products to us.”

Layton notes that sales have increased since the LCBO has been stocking its shelves with more out-of-province wines.

“Sales of wines from other Canadian provinces in our fine wine and premium spirits sections were up 60 per cent last year over the previous year,” he says.

For price comparisons with Quebec, generally speaking I think you will find our wine prices are lower, and we have a lot of Quebec customers shopping in our (Ottawa) stores for that reason

“We can obtain wines from other provinces usually within three weeks from the time the order is placed, says Layton. “The order can then be sent to the person’s local store anywhere in Ontario for pick up.”

Still, the cost per bottle is higher than if purchased at the source due to the addition of Ontario levies.

“You’re buying the out-of-province bottle of wine at Ontario’s retail price, not the local price,” says Layton. “You’re paying a price that factors in all the required provincial markups in taxes and levies.”

Although Layton had no specifics, he believes the fact that LCBO locations in Ottawa are catering to these customer demands means the board has little to worry about in the region.

“For price comparisons with Quebec, generally speaking I think you will find our wine prices are lower, and we have a lot of Quebec customers shopping in our (Ottawa) stores for that reason,” he says.

Overall the restrictions on interprovincial sale and shipment of alcohol have helped the LCBO. In 2009, the board produced a profit for the Ontario government of $1.41 billion, as well as more than $500 million in sales taxes and $346 million in excise taxes and import duties – its highest-ever totals.

The Beer Store, which is privately owned by the Labatt, Molson Coors, and Sleeman brewing companies, also experienced record financial results in 2009. Commodity tax revenue associated with beer sales in Ontario totaled $1.59 billion, of which the province took $1.11 billion and the federal government $471 million.

Those profits come even as The Beer Store spokesman Jeff Newton admits Ottawa locations often lose business to cheaper prices across the border.

“To say we’ve had a noticeable impact, well, that’s right. It’s always been there,” says Newton. 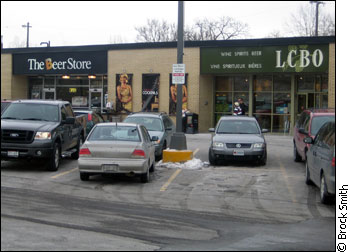 Ottawa’s LCBOs and Beer Stores have to compete with cheaper prices and greater selection in Gatineau.

Newton says the difference in price for a case of beer is largely driven by a significant tax differential between Ontario and Quebec.

The commodity taxes on bottled beer in Quebec are 40 cents a litre in Quebec, whereas it’s 87.35 cents in Ontario. For cans, the disparity is even larger. In Ontario, where there’s an additional tax on cans, it’s 1.1205 cents a litre, versus 40 cents a litre across the border.

“There has to be difference in price at the Beer Store when we have almost three times higher taxes than our neighbours,” says Newton.

In an effort for The Beer Store to compensate, Newton says “any kind of affect the tax differential has is largely factored into the prices at our province-wide stores.”

Newton says The Beer Store balances these higher taxes by setting higher prices throughout Ontario, and because the vendor continues to hit record profits across the province, he isn’t particularly concerned about its revenue in the Ottawa region.

In the wake of the Harris Decima survey’s findings, the Ontario Ministry of Finance indicated the law prohibiting the movement of alcohol across provincial borders is unlikely to change. Ministry spokesman Scott Blodgett stated in an email that “it is under federal legislation that the LCBO is able to control alcohol in the province. Expert bodies, including the World Health Organization, are strong supporters of the public control of alcohol as an effective social responsibility measure.”

Although approximately three-quarters of Canadians are unaware and opposed to this law, with the record amount of funds the LCBO and The Beer Store are supplying the provincial government, it is understandable why Ontario’s Ministry of Finance deems it unlikely a law generating approximately $3 billion annually will be altered.