Jane Gerster says she had no idea she was spending $200 a month on coffee.

But three or four cups each weekday at stores such as Starbucks adds up quickly.

“I just wish I had been more intelligent and thought about the fact that if I hadn’t been spending all my money on coffee, I could have been saving,” says the fourth-year Carleton University journalism student.

The beverage accounts for more than 80 per cent of the caffeine adults consume, according to a 2008 Statistics Canada study. The same study found women between the ages of 19 and 30 drink more than 470 millilitres of coffee a day. Men the same age drink almost 580 millilitres.

This is a combined daily average of about three cups of coffee, considering that the Specialty Coffee Association of America says a cup is 175 millilitres. 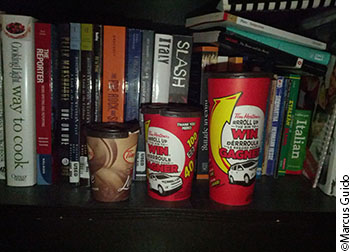 But the caffeinated drink isn’t cheap. The least expensive option among popular stores is an extra-small cup from Tim Hortons, which is $1.30 with tax.

However, lattes and mochas at shops such as Starbucks and Second Cup can be more than $7 each with additions like whipped cream and shots of espresso.

Contrast this expensive beverage habit with the cost of a postsecondary education. The Canadian Federation of Students says students such as Gerster enter the workforce with an average debt load of almost $27,000.

In fact, Gerster says she had to borrow $1,000 from her parents in August. But as she found out, there were ways to quench her thirst for coffee without going bankrupt.

“I just realized it’d be much cheaper to carry around a mug filled with coffee I make at home in the morning,” she says. “Now, I only occasionally buy (pre-made) coffee in afternoons when I really need it.”

Luckily for students, Wal-Mart sells coffeemakers that are as cheap as $12. The least-expensive brand of instant coffee it sells, Folgers, costs less than $10 for more than 900 grams. That amounts to 200 cups.

This is the equivalent of 50 extra-large Tim Hortons coffees, which would cost $100. The fast food restaurant’s customers could also spend $195 on 150 extra-small cups for the same amount of coffee.

Bringing home-brewed coffee to school is the easiest way for students to save money while treating their cravings for caffeine, says Marta Plaustza, a sales manager at Sun Life Financial in Waterloo, Ont. who has Conestoga College students as clients.

Buying large quantities of any item at once is ideal to save money, says Tyanna Mumby, a Carleton commerce student and vice-president of finance for the university’s business students’ association.

“If you buy in bulk, it’s always going to be cheaper than it is if you’re purchasing three individual coffees,” explains Mumby, who also works in customer service for the Bank of Montreal.

Students won’t find money evaporating from their wallets if they make their own coffee, she says.

“It’s hard to spend $50 a week on caffeine, which many students do, if you rely on coffee you make yourself.”

Even buying luxury coffeemakers such as a Tassimo, which typically costs more than $100, is financially worthwhile, she says.

The difference between purchasing pre-made coffee and brewing her own has been obvious for Gerster, she says. She’s cut down her spending by 86 per cent and now satisfies her coffee craving with only $28 a month by buying beans at grocery stores.

But this doesn’t mean Gerster has had to drink less coffee.

She says her Bodum brewer, which can cost between $30 and $50, gives her about four cups of coffee in each pot.

“I usually make a pot in the morning, which I drink half of at home and take the rest to school. I don’t drink as much at night anymore, so it’s easier to sleep,” she says. “I guess making my own coffee has worked for me in more than one way.”