Every year, graduating university students across the country fill up backpacks, search online for cheap flights and start their trek across Europe or Asia.

But for the students laden down with debt and trying to find ways to fund their life-changing trip, it’s not easy.

Websites, travel agents and even specialized graduation trip companies all scramble to have you book your travel arrangements through them. 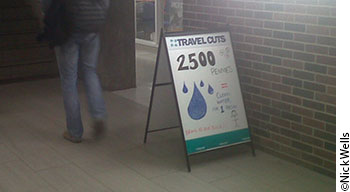 For students on a budget, companies now offer far more opportunities than those afforded to our parents 20 or 30 years ago.

Some fund their trip abroad by working before, others by working while they’re abroad.

But which way is the most popular, and how can students save money?

Ariane Klassen graduated from the University of Western Ontario last year, and spent three months travelling across Europe. She touched down in Iceland, Germany, France and Italy.

HOW DID SHE MANAGE IT?

She worked throughout the school year.

She worked through the summer at the Deaf Culture Centre in Toronto, saving about two-thirds  of her paycheque, after her final year of schooling and also took out a line of credit.

“I had a line of credit that I took out during university and never touched,” she said. “I was fine racking up a bit on my line of credit during the trip. Some people aren’t, but I was fine coming out of it with debt.”

Happy to hunt for deals online, she trawled through pages of airline fares to find a ticket. She ended up buying one from Iceland Air, which offers discounts to passengers if you’re willing to have a stopover in Iceland.

Spending $8,000 for the trip, budgeting roughly $1,000 a month for food, she and her boyfriend cut down transportation costs by using ride shares.

While Klassen was happy to shop online for her travel needs, the concept of cheap flights only being online might be not as true as we think.

“It’s a bit of a misnomer that online is always cheaper,” said David Coffey, the director of sales and business development with Merit Leisure Group. “We contact directly the airline and we have a long history with major air carriers.”

Merit owns Travelcuts, which is a travel agency run in universities across the country. They specialize in trips based around students’ needs, providing travel insurance as well as getting students in touch with local employers in their final destination.

The bonus of using an organization such as Travelcuts is the added security it provides.

“There can be good deals through Hotwire for a specific customer who wants a last minute getaway and can take a risk,” said Coffey.

One trip through Travelcuts, through Contiki Tours, lists a 39 day trip from England all the way to Greece as roughly $5,085 per person.

The prices are nearly the same, with a travel agent supplying travel insurance and the security of a guaranteed room.

“Most students want to travel in a meaningful way,” he said. “[Travelcuts] allows students to stay up until 12 months on one ticket, for possibly no price change.

While Klassen saved money for the trip, Eric Balnar took the opposite route

He graduated last year. As a graduation gift from his grandparents he was given money to buy a plane ticket abroad.

He turned that one-way flight in to what has been nearly a year abroad working and travelling.

THE COST OF FLYING

For him, the most expensive part of the trip was the flights.

“If you’re happy doing it last minute then you’re fine,” he said.

He has worked in pubs, hotels and most recently moved to Paris to work. While he admits his family has helped support him to come home for events such as a family wedding, he’s on his own while abroad.

While Balnar has made his experience work through hard work, there are opportunities to take advantage of student discounts.

For any enterprising student, Coffey suggests they sign up for an International Student Identification Card.

The card provides discounts for travelling, as well as visiting museums and going on tours.

While Klassen was able to cope piling up debt, and Balnar worked to balance it off, both suggest budgeting for the little things.

PLANNING FOR THE UNPLANNED

Klassen says if she was to do it all over again, that unplanned expenses such as laundry (which is a necessity when you’re out all day) can add up very quickly.

“Laundry, when you’re abroad can get expensive and if you have a kitchen and you can make food” she said. “It’s something no one thinks of.”

Staying in an apartment, instead of a hostel, and travelling with friends can also cut down on prices.

In the end, the trip – according to all – is about the experience.

“I loved every minute of it,” Klassen said.