Rick Hobbes’ cattle farm southwest of Ottawa has been in the family for four generations. He is used to seeing tough times come and go, but bouncing back from the recession is forcing cattlemen like him to change the way they do business.

“Cattle has a cycle, but every time the cycle gets to the peak where prices should be good, there’s always something else. It’s should have been good during the BSE years, but BSE hit,” Hobbes says, slicing trough the twine around a hay bale. “And now it should be coming this spring or early fall – the peak- but because of the dollar, it’s not going to.” 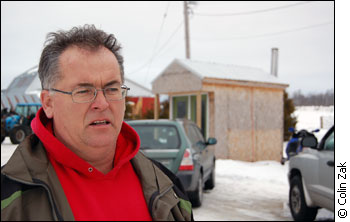 A strong loonie means fewer American customers for Canadian beef. It’s just one of the many hurdles standing in the way of Ontario’s cattlemen in their road to recession recovery. High feed costs, an abundance of beef on the market and with many shoppers opting for less expensive pork, many beef producers are going bust.

“People today want to know where their meat comes from or their food comes from,” Hobbes explains. “If you go to Loblaws, it could come from anywhere.”

Half of us will go broke

“It’s not the fault of the farmer, it’s just the way things are,” Hobbes says. “I don’t like to say it, but half of us are going to have to go broke.”

By selling directly to individual buyers, Hobbes says he’s cut out the cost of the middlemen standing between his farm and the kitchen table.

Each year, he sells about 100 black and brown Angus cows this way. It accounts for two-thirds of his annual sales.

His family has been selling beef this way for a few years now. This year’s been so successful he’s erecting a store at the entrance to his property in Ashton, 30 minutes outside Ottawa. 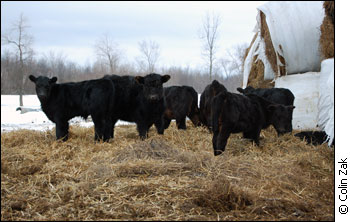 While selling locally has rescued the livelihoods of some ranchers, Maury Bredahl, Director of the Centre for Agribusiness Research and Management at the University of Guelph, says it’s no panacea for Ontario’s ailing beef industry.

“Can buy local be a significant market for the industry? Let’s say take a large portion of the industry? The answer is probably no, but it will provide a good opportunity for some of the producers that decide that a portion or all of their output will be designed for that market.”

Long gone are the days when cattlemen drop off their cows at the auction house and receive a cheque in the mail a week later, says Bredahl. He says Ontario’s beef producers have to expand their clientele.

“It’s a symptom of a change in an industry,” Bredahl says. “The marketplace of the future will be much more fragmented and differentiated.”

This means selling directly to individuals, restaurants or supermarkets.

For cattlemen like Dave Smith, targeting niche markets has paid off.

At his farm, just down the road from Hobbes, Smith raises organic grass-fed Angus beef. He only sells 20 cows a year but he says business has never been better.

“It was a banner year.” Smith says. “I’ll have excess demand for as long as I can see ahead of me. I get calls every day.”

He says the popularity of eating locally and organically is driving his business.

“Every week you get maybe a dozen flyers from food places. And so you’re trained to think that the only difference between foods is price. And it’s not the case, and people are figuring that out,” Smith says. 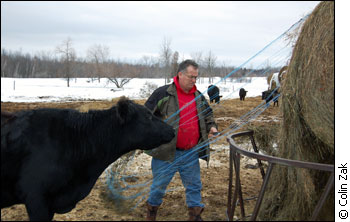 Hobbes does some of his morning chores.

Smith and Hobbes are some of the lucky few that have weathered the recession by tapping into niche markets.

Curtis Royal, President of the Ontario Cattlemen’s Association, says Ontario’s beef producers face a simple case of too much supply and not enough demand.

“Essentially, in North America, we’ve got a lot of protein on the market,” Royal says. “It’s got to get worked through.”

That could be up to a year away before cattlemen see an upswing in beef prices.

In the meantime, Royal says a good many producers could go out of business.

“We are losing producers,” Royal says. “That’s one of the casualties of what we’re going through with these high inventories.”