For the past two months, Bank Street businesses have been breathing a little easier. 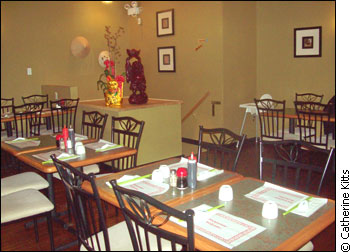 While most merchants eagerly went into the Christmas season hoping to build back lost revenues from four years of disruptive construction, some were not lucky enough to see the new opportunity.

Don Alfonso’s Restaurant was one of those casualties.

The authentic Spanish cuisine hot spot simply could not afford to hold out for a few more difficult months, finally closing its doors on June 1, 2009.

The eatery had held its place at the corner of Bank and Gladstone for more than 29 years.

“It was a 24 hour decision,” says former owner Tony Garcia. “My only regret is not giving our regulars time to say goodbye to the place. There were a lot of first dates there, wedding receptions, a lot of anniversaries.”

Garcia, who began as a bus boy at the restaurant in 1992 said the decision to close came with sadness, “[The restaurant] was part of my family,” he says. “I grew up there.”

Now looking back on the close seven months later Garcia blames the combination of the construction and the recession for the demise of his beloved restaurant.

He calls it a “double blow” saying the restaurant could have contended with one or the other, but both at the same time left the 30-year-old business man without many options.

In 2008 Garcia accepted a full time corporate position with the Cordon Bleu in New York City. After commuting every weekend for eight months, he put Don Alfonso’s on the market to sell, hoping a buyer would be interested in taking over & continuing with the same Spanish cuisine Garcia grew up with.

The problem – no potential investor was interested in contending with the deadly combination of the construction and the recession.

Despite efforts from the Bank Street Business Improvement Area to lobby City Hall for compensation, the City of Ottawa did not offer any reimbursement during the construction. The BIA did invest some $50,000 into local advertising that was geared at reminding locals of business as usual on the Bank Street Promenade.

In an email recently sent from the Bank Street BIA to former and current members, the association tallied six closures including Don Alfonso’s and Maison Baguettes Bakery, which had been in business for six years.

Kate Lalumiere, a former Don Alfonso’s employee, says she began to see the restaurant was in trouble after Christmas in 2008.

“We were able to maintain our clientele but they came less frequently,” says the ex- waitress. Lalumiere was forced to find another part-time job at a restaurant in the city’s Byward Market restaurant district, where the recession was still taking a toll, but construction was thankfully not an issue.

The James St. Pub, just a few doors down from where Don Alfonso’s used to reside says it is pleased the construction is over. The manager noticed a general frustration among its clients about the construction but the large patio allowed the restaurant to scrape through the summer months.

“I think the recession definitely affected all restaurants and bars,” said Erin Walker, manager. “But we’re lucky in that we’re a pub. People may not spend big bucks on a fancy steak dinner but they’ll come have a beer or two here regardless.”

Right next door to the former Don Alfonso’s, The Whalesbone Oyster House, had a different opinion. Unlike its neighbour, the restaurant was proud to report that the construction had absolutely no affect on sales.

Manager Richard Boucher describes The Whalesbone as a destination restaurant and explained that the restaurant is almost always full, mostly by reservations.

“I think the businesses that really suffered were the ones that rely on walk in traffic from the street,” said Boucher. “Our restaurant doesn’t. That’s what set us apart.”

After five months of vacant space at 434 Bank St., Rice Wrap Vietnamese Cuisine has taken over Don Alfonso’s old territory, hoping to grasp onto some of the longevity the site’s previous tenant had.

Manager, Ben Vi says he admits it was ambitious to open a restaurant in the midst of recession, but is grateful his grand-opening a month ago just missed the construction.

Vi says he expects the busy corner will encourage walk in traffic and is relying on word of mouth to promote his new restaurant. He hopes for an upswing in the restaurant business, and is confident that people will begin to spend again.

Garcia is also hopeful, and has a project in the works to open a more modern style Spanish tapas bar in New York. “The decision to close [Don Alfonso’s] was made in an absolute business sense. There was a lot of sentiment there, but that does not outweigh financial loss. It’s on to the next step.”