Upon entering the Hospice at May Court in Old Ottawa South, the walls are warm and adorned with large pieces of colourful art as the hospice puts on a brave face for its visitors and patients after a tumultuous past year.

Like many businesses and not-for-profit organizations around the world, the hospice couldn’t dodge the effects of a recession that gripped the economy. 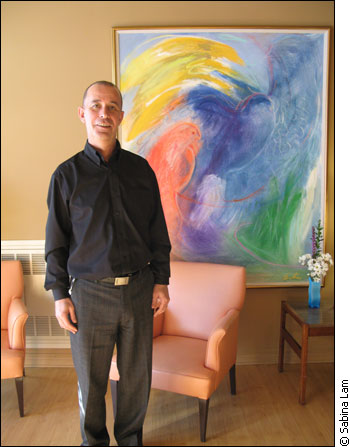 The greatest lesson Gerard Yetman, executive director of the Hospice at May Court, says he has taken away from the past year is to grin and bear whatever new challenges the economy presents.

Yetman knows the effect of the recession all too well after taking on his role in December 2008, just as the economic crisis took hold, to rejoin the front lines of palliative care after working at Health Canada for  more than 20 years.

He says while the hospice managed to reach  its fundraising goals last year – raising $1.3 million of its $2.4 million annual operating budget – it wasn’t always smooth sailing.

In order to ensure the Hospice at May Court could continue to offer its medical and clinical services free of charge to  its patient’s families, Yetman laid off several administration employees to reduce payroll and streamlined the processes of how the company operates.

“We strongly believe the services we offer need to be free,” he says. “End of life is really difficult for families in general and by the time our patients get to our services, their families are already experiencing major grief and burn out, both financially and emotionally.”

In tough economic times, not-for-profit organizations are not only the first to take a hit, but they are often hit the longest.

As other sectors of the economy begin to see glimmers of recovery, non-profit organizations are awaiting to hear how deep their government funding will be cut this year when the next provincial and federal budgets are released, says Brenda Gallagher, co-ordinator of the Ottawa Chamber of Voluntary Organizations, which represents local non-profits in the city.

This is not good for organizations that have already been stretched thin in order to continue their operations.

“Recessions are a bit of a double-edged sword for non-profit organizations,” Gallagher says. “Most experience a decrease in funding, but an increase in demand for their services and programs for people who have been personally affected by the downturn.”

While few can predict how long the recession’s recovery may take, Gallagher says non-profit organizations will continue to feel the impact of the downturn for another year, or maybe even two.

If there is a silver lining to the situation, Ian Lee, associate professor at Carleton University’s Sprott School of Business, say recessions are an excellent opportunity for well-managed not-for-profit organizations to step back, reassess their mandate, diversify their revenue streams and become stronger moving forward.

SOME GOOD NEWS IN BAD TIMES

“Recessions affect non-profits the same way as they do regular businesses,” he says. “They’re Darwinian in the sense that they separate the weaker from the stronger. Those that have stronger leadership will continue to survive, while others will not.” 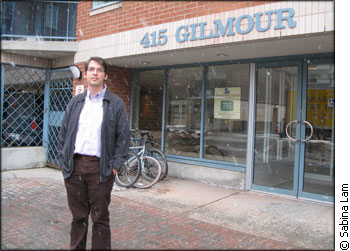 It wasn’t all doom and gloom for local not-for-profit organizations. With a greater dependence on social services from those personally affected by the recession, organizations such as the Centretown Citizens Ottawa Corporation have thrived in the business of providing affordable housing to those in need.

Ray Sullivan, executive co-ordinator of CCOC, says the organization has had one its best years financially, as the vacancy rates of its 48 properties have fallen below one per cent.

“We have to wear two hats,” says Sullivan. “On one side, we’re landlords, maintaining and operating rental properties, but on the other side, we’re advocates for affordable housing . . . While business has been great, in some ways, we would prefer that our business suffered.”

Gallagher says such instances successes in the face of a recession are a rarity. She says while organizations have reacted differently to the recession, there are still some difficult decisions that have to be made along the way. But in In the end, for those that survive the impact of the recession, they may be bruised, but not battered.