One of the nice parts about living in Ottawa is its proximity to Quebec. Crossing a bridge into Gatineau means access to ski hills, Gatineau Park, the Museum of  Civilization and… cheaper beer.

Buying alcoholic beverages in bulk on the Quebec side of the bridge can lead to a lot of savings, for Ontario residents. 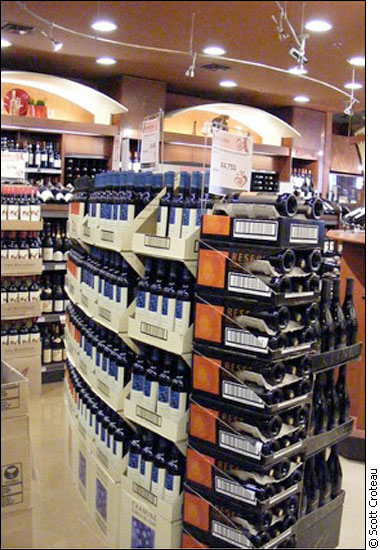 Lots of choose from on both sides of the border.

In Ontario, there is a 10 per cent tax on liquor, while in Quebec  it is a 6.5 per cent. This translates into cheaper prices for consumers of alcohol in Quebec.

However,  while beer and liquor are cheaper on the Quebec side, wine is less expensive in Ontario.

Roderick Phillips a professor at Carleton University who specializes in the history of alcohol,  says that the cheaper prices for different alcoholic products reflects different policies regarding the sale of alcohol in each province.

Quebec isn’t privatized.  It has a provincial liquor system like Ontario, but it allows sales of specific alcohols through “depanneurs” and grocery stores. Ontario, on the other hand, has winery-owned wine stores, like the Wine Rack,” says Phillips.

For example, a 2008 Santa Carolina Cabernet – Sauvignon Reserve costs $11.95 in Ontario at the LCBO, while at the provincial government owned Société des alcools du Québec (SAQ), it costs $13.90. A 2007 Mike Weir Cabernet/Merlot costs $18.95 at the Liquor Control Board of Ontario stores (LCBO) and $20 at the SAQ.

These cheaper prices have led many residents of the Ottawa area to make the trip the Quebec to buy their beer.

Nick Harper, who lives in the east-end of Ottawa, purchases his alcohol in Quebec and believes that buying booze in Gatineau is worth the trip.

“The savings I get from buying beer and liquor in large amounts in Hull [Gatineau] covers the cost for the extra gas needed to get there,” says Harper. “It makes sense for me to drive to Hull and buy booze in bulk to save money, similar to how people go to COSTCO for other goods.”

The Importation of Intoxicating Liquors Act is a 76 year-old federal law which makes bringing alcohol across provincial lines illegal. This law remains unknown by many who buy their alcohol in Quebec and it isn’t enforced.

For Mr. Harper, the law isn’t enough to discourage him from shopping in Quebec.

Once you start thinking of buying beer and liquor in Hull as the smart choice to save money, whenever you buy it in Ottawa, it feels like you’re wasting money,” says Mr. Harper.